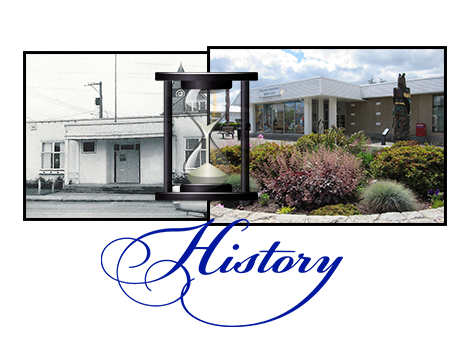 It was Nov. 30, 1946 that a group of Duncan citizens ranging in age from 35-70 were granted a Charter by the British Columbia Old Age Pensioners Organization. This was our beginnings. During these early years the branch moved from one set of clubrooms to another.

The first permanent home was found in 1970 in the formerMunicipal Building on Canada Ave. and Kenneth Street and was sponsored by the Rotary Club as well as the City of Duncan. At that time there were 184 members on the roll.

On May 4th, 1971, Queen Elizabeth laid the cornerstone of the building which was to become the permanent hone of the O.A.P.O. in Duncan . One half of the building was to be the Regional Library and the other half became a much used Seniors drop-in Centre following the move from the Canada Ave. site on April 19th,

Soon afterward it was discovered that the City was negotiating to sell the building to the Provincial Government. We needed more space and the President at that time met with the Mayor and Committee and put forth a brief asking for more room and the space occupied by the Library was given to the O.A.P.O.

On Sept. 5, 1979 the O.A.P.O. annex was officially opened. Chaired by President J. Elliot , the ribbon cutting was performed by Mayor Jim Quaife. In 1986 the building was enlarged to again facilitate more activities. The final extension completed and was occupied on July 1st , 1996.